Plans for more than 3,000 new homes in Essex have been submitted in proposals brought forward by Broadway Malyan with Commercial Estates Group (CEG).

The Dunton Hills Garden Village scheme in Brentwood is one of the practice’s largest masterplanning applications in the UK, covering 225 ha of land in the Essex countryside.

The vision is to create a sustainable, diverse community that welcomes residents from all walks of society, while at the same time complementing and adding value to the local environment, and proactively tackling the housing crisis.

Working in collaboration with Brentwood Borough Council, landowners, multiple stakeholders, the local community and the wider consultant team, the proposals include the delivery of up to 3,700 new homes (including affordable housing), four schools (3 primary schools, a secondary/all through school), a village centre, two further neighbourhood hubs, employment and mobility hubs, and large amounts of multifunctional green open space.

In developing the masterplan, Broadway Malyan sought to redefine the usual stereotypes around a traditional English country village advocating a future village concept which is diverse, accessible, sustainable and affordable – many of the themes that are set out in our recently published report The Reimagined Village.

The Garden Village is based around three neighbourhoods – Dunton Fanns, Dunton Waters and Dunton Woods, each with their own distinct character. At the heart of the site is the mixed use village centre set around a market square and village green. To ensure that each neighbourhood is sustainable and walkable, each has its own neighbourhood hub containing education, retail and community uses, alongside improved pedestrian and cycling routes. 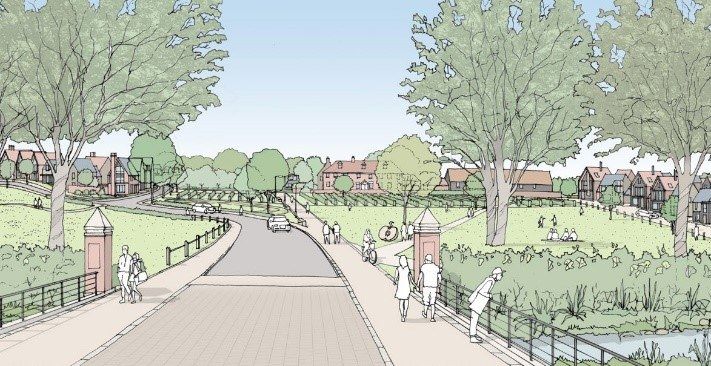 With latest research showing that attitudes towards work/life balance have changed since the pandemic, more people than ever before are moving to communities that have a better sense of place and access to open spaces.

This has been at the forefront in the plans for Dunton Hills with around half the village comprising multi-functional green open space. This includes a mix of sports pitches for people of all ages to exercise and participate in outdoor activities, trim trails and wetlands. Community growing and rewilding spaces are also proposed, to enhance the site’s rich ecology, complementing the historic Grade II listed farmstead at the heart of the village.

A mobility hub is also proposed in the village, to take advantage of the new innovative, sustainable methods of transportation being rolled out more widely across England. The mobility hub is also linked to a (car free) mobility corridor that connects the village to Station Road and on towards West Horndon Station, ensuring excellent longer distance connections to London and other destinations across south Essex.

Jeff Nottage, Broadway Malyan Lead Masterplanning Director on Dunton Hills said: "Dunton Hills Garden Village represents a significant milestone in the continued evolution of the Garden Communities movement. We are pleased to have undertaken a positive programme of engagement with the local community, Brentwood Borough Council and other stakeholders on the designs for the new village, the final plans of which show the importance new villages can have in tackling the housing crisis, creating a truly self-sustaining community, that will deliver much-needed homes and expansive open space that seamlessly integrates into the Essex countryside."

“The plans show the importance new villages can have in tackling the housing crisis, creating a truly self-sustaining community, that will deliver much-needed homes and expansive open space that seamlessly integrates into the Essex countryside.”
Jeff Nottage, Practice Principal, Broadway Malyan

Garden villages – a key part of the jigsaw

Reimagining the fate of the village