New £30m mixed use tower in the heart of Reading.

No1 Reading will see the redevelopment of a corner plot opposite the town’s railway station into a hotel, restaurant, bar and offices within an elegant 22-storey tower.

The proposals have been submitted on behalf of Station Road Dev Co Ltd, a company controlled by global hotel investors Frank Truman in partnership with Breithorn Developments and Legacy Hotels & Resorts.

As well as a 135-room hotel and five storeys of office space at the top of the development, the proposals include a ground floor café/ retail space, a first floor reception and bar and second floor restaurant to add a vibrant and active frontage along one of Reading’s busiest thoroughfares.

The development sits at a key pedestrian gateway into Reading and as such the building fully interacts with the streetscape. The building’s entrance itself is set back within a double height colonnade to extend the public realm from the footpath while the proposed clear views into and out of the hotel and retail facilities between ground and second floors will create an interactive multi-level frontage that will bring an exciting new element to Station Road.

The façade concept for the building is defined as a series of overlapping grids that emphasise the verticality of the building while the layout of the grid and the nature of the infill areas emphasise the different functional uses of the accommodation behind. The scale and permeability of the lower levels draw on the existing building lines at street level. As the tower rises, increased glazing maximises views and helps dissipate the top of the tower into the sky.

The material palette references the architectural language of Reading’s non-secular buildings with a buff /white brick giving the primary grid the character of stone, accentuated by staggered glazing and dark infill cladding. 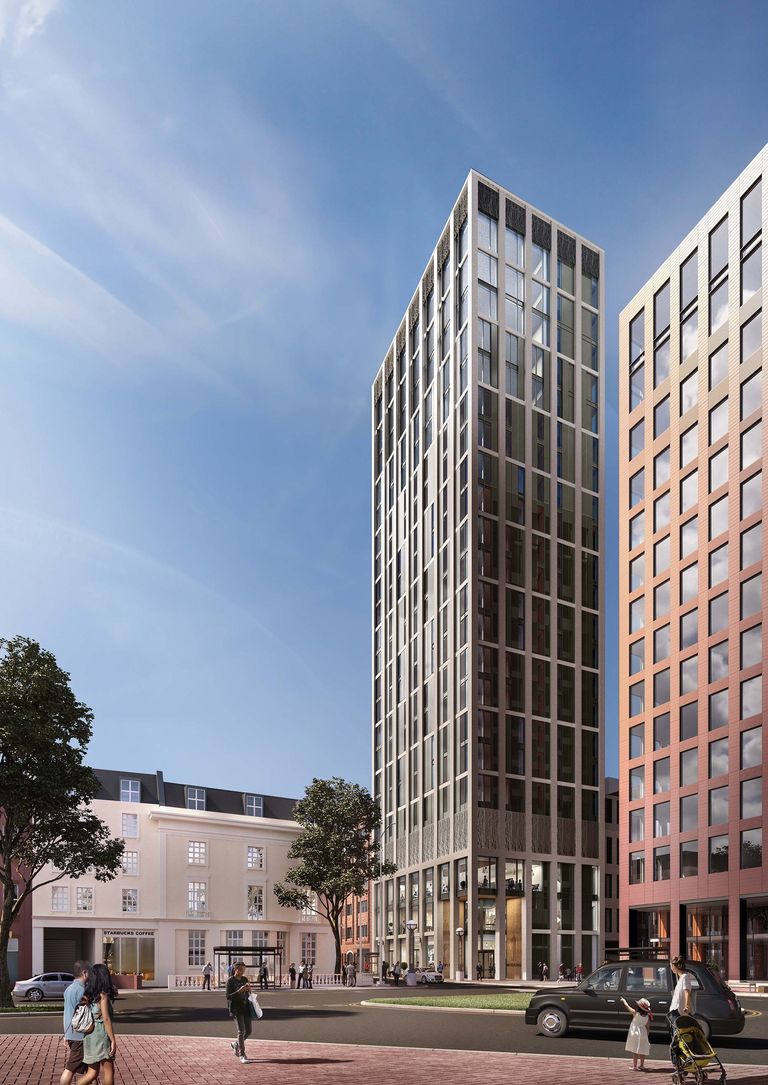 “The redevelopment of 29-35 Station Road provides an excellent opportunity to deliver a building of the highest quality opposite the entrance to Reading railway station which will complement both Thames Tower and the neighbouring Station Hill development”
Michael Tomkins, Station Road Dev Co Ltd Development Director