Broadway Malyan has strengthened its reputation as one of the premium education designers in the Middle East after being appointed to design a major new international campus in Qatar.

The new facility for ACS Doha is the latest in a string of major projects being led out of Broadway Malyan’s Abu Dhabi studio that will see five projects completed for the forthcoming academic year.

The new state of the art campus – which is set to open in August 2019 – is the latest of a number of collaborations between Broadway Malyan and ACS International which includes development and masterplanning projects at their three UK campuses.

Broadway Malyan director Nick Davies, who leads the practice’s education team in the Middle East, said the investment reflected the growing demand for high quality educational facilities for both the large ex-pat community in the region as well as an increasingly aspirational local population.

He said: “ACS launched its first Doha campus in 2011 and this new project is a reflection of their success and the need now to increase their capacity. There has been a huge increase in the international schools sector in recent years but there remains a pressing need for additional places as demand continues to grow.”

The new school will be spread across a 60,000sqm campus – compared to the 11,000sqm of its original campus – and cater for almost 2,500 students with educational and sporting facilities that reflect the latest thinking in pedagogic design evolved from a decade’s experience working in the education sector in the region.

The ACS Doha commission is Broadway Malyan’s second major international project in Qatar where it is currently carrying out a major refurbishment of the American School of Doha, due for completion this summer in time for the start of the 2016/17 academic year. The practice has also previously worked with the Qatari government on a new school prototype to be rolled out across the country.

Other projects set to complete in time for the next academic year include Broadway Malyan’s first two international schools in Dubai – Kent College School and the new Jebel Ali School as well as a new academy for Aldar in Abu Dhabi, its seventh in the region.

The new Kent College School is a partnership between the celebrated UK school, major Dubai business group Mir Hashem Khoory and the Maydan Group. The 38,000 sq m campus, which will be located next to the world famous Maydan race track, will offer classes from kindergarten to 12th grade with significant emphasis on sporting and equestrian facilities and will accommodate more than 2,000 students.

The new Jebel Ali School campus will offer foundation to 13th grade British curriculum across the 32,000 sq m campus and features separate foundation, primary and secondary school buildings with an auditorium and high class sporting facilities including a sports hall, outdoor swimming pool and sports pitches – an increasing trend across all international schools in the region, according to Nick.

He said: “While the demand is strong, this remains a highly competitive sector and so each school must offer the kind of high quality facilities that pupils would expect in the best educational systems in the world.

“Sport is a particularly important factor in the international school design process as the growth in the sector is seeing increasing inter-school competition in sports like football, rugby and netball and the ability to hire out facilities to local clubs also offers a separate income stream for the schools.

“The challenge for all these education providers is securing a large enough plot to accommodate their aspirations due to the land constraints in the region so an innovative approach is important as we strive to incorporate exciting spaces for learning, meeting and playing sport into our school designs.” 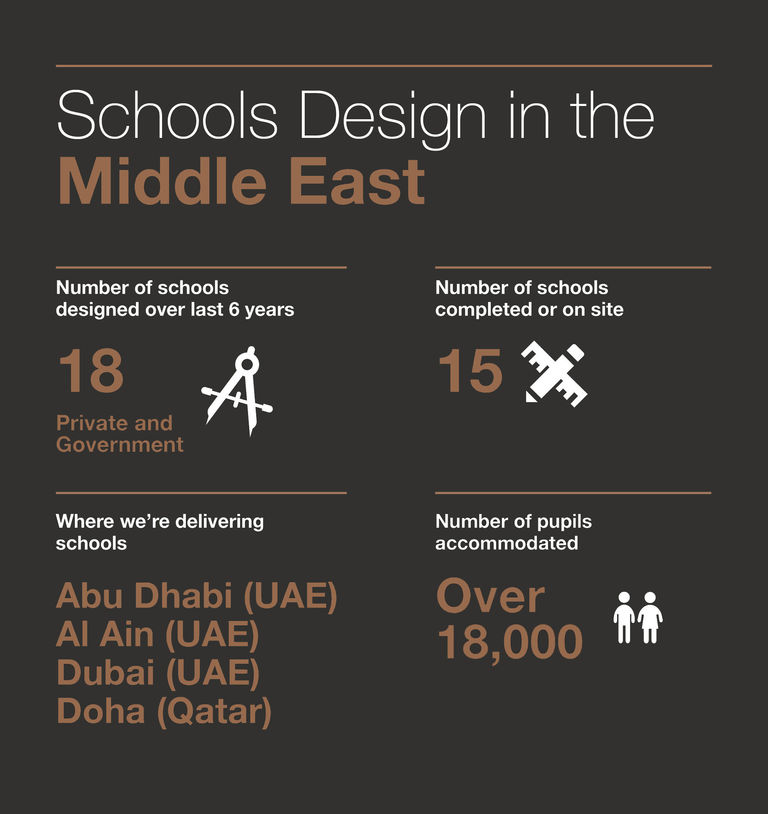 The Kindergarten of the Future, established 1837