A famous Portuguese hotel with a history dating back to the 14th Century has been completely refurbished by Broadway Malyan.

The practice was commissioned to transform the 4-star Quinta das Lágrimas boutique hotel in Coimbra after successfully winning an open competition held by its owners. The project included redesigning all guest rooms, the lobby, the corridors, the bar and restaurant.

“Quinta das Lágrimas is a historically important building in Portugal and so it was important that the refurbishment honoured the past but with modern interventions that met the client’s aspirations of creating a luxury hotel that also provides its guests with a cultural experience.”
Margarida Caldeira, Director, Broadway Malyan

The estate is well known across Portugal as the location of a forbidden royal love affair between the Crown Prince Pedro and his bride-to-be’s lady in waiting that resulted in her murder in 1355 by the Pedro’s father, King Alonso IV. The name of the hotel means Estate of Tears.

Margarida Caldeira, who heads Broadway Malyan’s Lisbon studio, said the interior design concept was driven by a desire to create a contemporary hotel environment while respecting the building’s rich history.

She said: “Quinta das Lágrimas is a historically important building in Portugal and so it was important that the refurbishment honoured the past but with modern interventions that met the client’s aspirations of creating a luxury hotel that also provides its guests with a cultural experience.

“The hotel is synonymous with the legend of Prince Pedro so we used strong elements of blue, the royal colour of Portugal, in the design as well as introducing modern classic furniture that complemented the hotel’s existing historic artwork.

“The hotel is set within a stunning mature garden with a number of mature trees and we used a patterned carpet that represented the shadows from the leaves while exposed polished timber was also a key element of our design concept.”

The estate was originally a hunting ground for the Portuguese royal family but the current main building was first built in the 1730s after the estate was acquired by the Osório Cabral de Castro family and rebuilt in the 19th Century after a major fire. 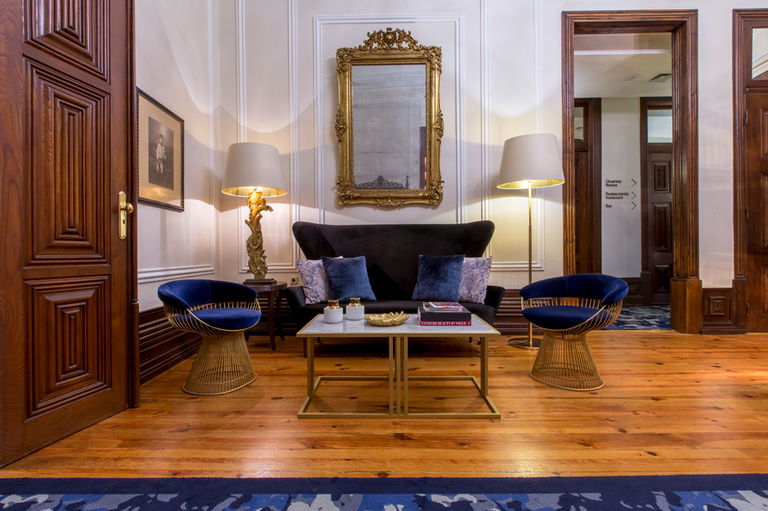